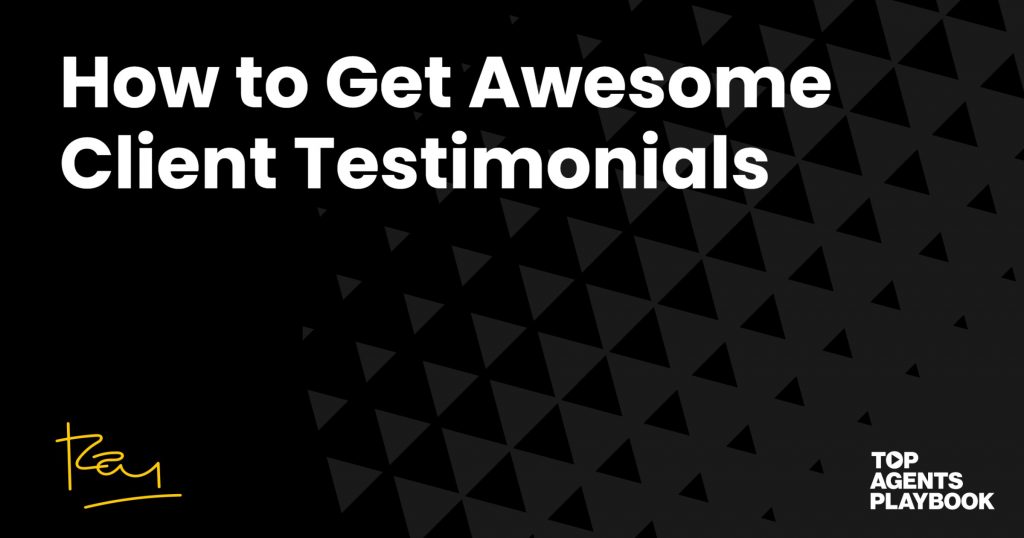 If you don’t have at least 10 awesome testimonials you need to get them ASAP because they are, by far, the best marketing weapon you will ever own.

I love testimonials because they cost little or nothing to secure, are virtually priceless and will last your entire career.

A great testimonial is the gift that keeps on giving!

But… the BIG problem is, most agents don’t know how to get a testimonial and when they do, it’s not very exciting.

Look at it this way:  When you’re in there pitching for business and you tell someone how good you are, they are hearing you but internally they’re saying to themselves “Well of course he’s going to say that because he wants my business”

But when someone else, who has nothing to gain by endorsing us gives a great testimonial it has enormous power and impact.

I came across this method of getting awesome testimonials quite by accident.

I had just sold a home for a couple and we achieved a fantastic result.

They were so pleased after the sale, the owner called me up and said “Ray, if there is anything I can ever do for you just name it”

I said that was very kind of him but the only thing I would really appreciate was a short letter saying what a great job we did so I could use it to show future sellers.

“No problem” He said and told me I would have it in a few days.

Well, 2 weeks came and went.  I called him up to say hi and “umm, by the way, have you had a chance to write me that short letter as yet”

“Wow!  I completely forgot about that” he said and told me he would email it to me the very next day.

You know that awkward feeling you get when someone promises you something and they don’t deliver and you will feel even more awkward if you call them?

Well that’s how I felt.  I let it slide.

Fast forward a month and my client’s letter turns up.  It was a few paragraphs long and simply said thanks for selling the house.

It was great to get the letter but the magic was gone.  Our stunning result had turned into a “good price” and they were “grateful for our assistance with the sale”

In other words, it was just another letter of thanks.  Hardly a brilliant testimonial I could leverage in all my marketing.

But still, it was a valuable lesson.

A little time later, another great result and another deliriously happy seller says “Ray, if there is anything I can do for you, please don’t hesitate to let me know”

This time I was ready:

“Thanks so much.  That’s very kind of you to say so.  There is just one thing I ask of each seller and that’s a short testimonial that I can use in future marketing.  But I know you’re busy and it’s a hassle to sit down and do that so here’s what I’m thinking:  How would you feel if I put down a few words and emailed it to you for approval.  Would that be okay?”

Well, the guy looked at me like he’d just been let off a speeding fine.

The next day I sat down at my computer and sent a message.

I thanked him for appointing me to help him sell for more and asked if he would be okay with me using the following testimonial.

“Hello Ray.  I just wanted to send you a message of heartfelt thanks for helping us achieve such a terrific sale result.  The way you helped us prepare and present our home made a stunning difference and to have 3 buyers all competing to buy our home is something every home seller should experience.  To achieve a result so far above our list price means we have so many more options when it comes to buying our next home.  Thanks a million”  Bob and Nancy Wainwright.

Almost straight away, he emails me back to say he couldn’t have said it better himself. Boom!!

So what just happened?  I not only got a sizzling testimonial when normally, I would have got something much more plain, I was able to articulate and influence the energy and language I was looking for.

I don’t really know just how many listings that helped me get, but when you put them together with a bunch of others, they make for a very powerful and compelling argument.

In fact, I would say that no other agent had the testimonial ‘weapons’ I had.  And just to think…  All I had to do was ask!

From that day on I never asked another seller to write me a letter of thanks.  I simply sent them a message and made it sound more like the awesome result is was.

On some occasions I would just write down what I wanted the testimonial to look like and call them up and say “Hey, let me ask you… Are you okay with me saying this?” And then I would read out over the phone the testimonial I was looking for.

I believe that there are way too many real estate agents, but there are not many marketers.  In fact, the best agents I know are awesome at marketing themselves and their client’s homes because they look at things very differently.

In fact, my main mission and my role with Bestagents is to help members to look at things differently because different get’s noticed.

I’ve just shown you how language is very powerful and it’s a tool we need to use whenever we can.