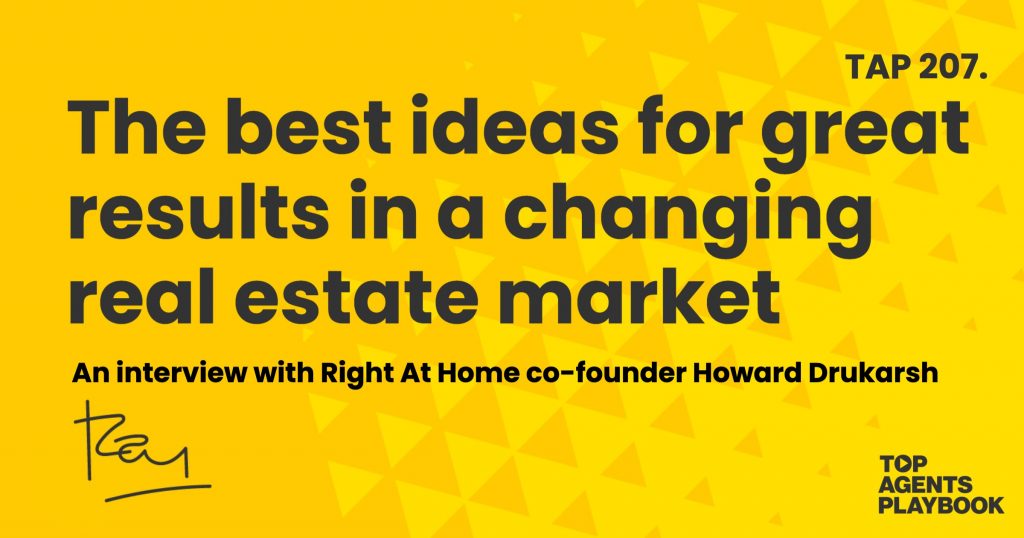 A few weeks back, my friend Danny Wood tapped me on the shoulder while I was watching a speaker at Toronto’s REALiTY+ Conference and told me I had to meet someone.

I followed Danny out into the foyer and was delighted to meet Howard Drukarsh, a fellow podcaster, career real estate legend and co-founder at Right At Home Realty, Canada’s largest independent real estate brokerage with almost 6000 members.

We only chatted for a few minutes but right there I knew I had to somehow get Howard on the show.

In this interview, Howard and I share our thoughts on what agents need to be doing in this current market to not only survive but grow their business and their brand while many of their competitors are wondering what on earth to do.

Many thanks to Howard for joining me on this call and sharing his very best ideas and strategies.

Howard’s podcast guest list reads like a who’s-who of Canadian real estate excellence. Can I suggest you check it out here:  RealEstateWithHowardDrukarsh.com

​Howard was born and raised in the working-class neighbourhood of Downsview in Toronto Canada. He spent his formative years working in the family variety store and snack bar before deciding to pursue post-secondary education, he was the first member of his family to do so. Howard attended York University and after graduating with a degree in Political Science he took a position at the Canadian Broadcasting Corporation in Audience Relations. While at the CBC he recognized that for him to move forward in his career he would need an education in business, to that end he enrolled in the University of Windsor and graduated with a Bachelor of Commerce degree. Seeking new challenges Howard began to work in Advertising, he had several positions with boutique agencies but soon felt that his true calling lay elsewhere. He wanted to explore his entrepreneurial side and decided that Real Estate would provide the best opportunity for him to do so.

Howard worked with several brokerages before settling at Johnston & Daniel A Division of Royal LePage Real Estate Services Ltd., Brokerage, it was here that he met the late Arthur Bartram and the two decided to start their own brokerage. Arthur had seen a new business model attracting hundreds of Realtors in the US and thought that with some tweaking it could be successful in the Canadian market. This new venture required funding and after a few setbacks in that regard, they were introduced to Ron Peddicord who possessed the business and financial expertise needed to scale up the operation as well as attract investment. Ron soon joined Arthur and Howard as the 3rd co-founder of Right at Home Realty. In May of 2004 Right at Home Realty opened its doors, 16 years later it has grown to become Canada’s largest independent brokerage with close to 6000 members.

A consummate Realtor with a vast and insightful knowledge of Canadian real estate, Howard is often asked to provide comment on issues affecting the real estate industry. Over his career, he has had the pleasure to serve on the Real Estate Council of Ontario (RECO) Board of Directors, the Toronto Regional Real Estate Board (TRREB), and continues to serve on the Board of Right at Home Realty.