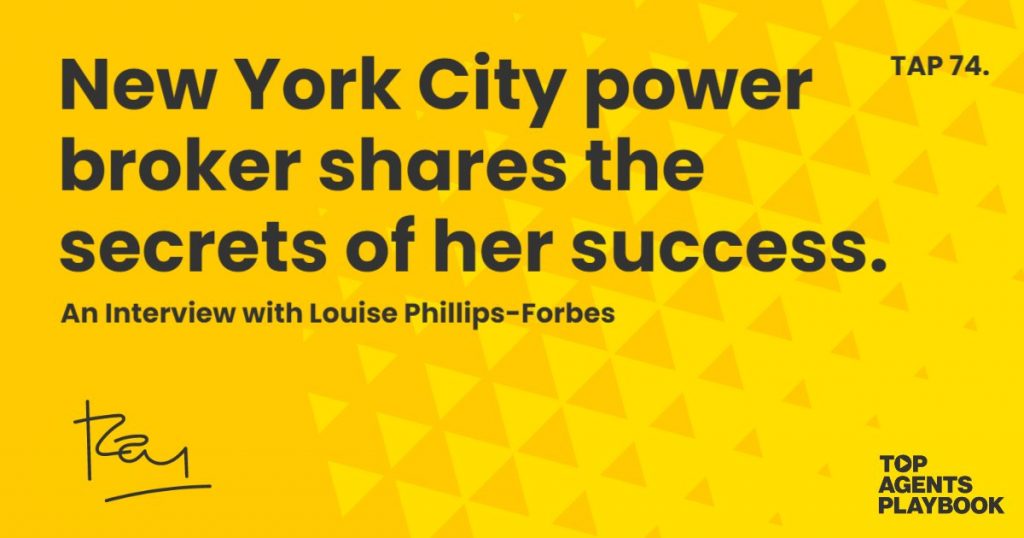 This podcast is brought to you by LockedOn. Real estate’s most beautiful software. If you can’t wait to boot up your real estate software program and get started every day to help you win more listings and make more sales, then it’s a clear sign you’re using the wrong software.

But why don’t you try it for yourself? All you need to do is go to LockedOn.com/TAP, you’ll not only get a a great discount for life, you’ll also double your free trial period from 14 to 30 days.

LockedOn is not only real estate’s fastest growing real estate software platform, you’ll also find it leads the industrial with customer support and technical response time. Try it now for free at LockedOn.com/TAP.

I just took a look at the line up for AREC 2017 on the Gold Coast this year.
My former guest Gary Vaynerchuck is the keynote speaker along with Bob Wolff, Best selling author Robert Cialdini, tech trend experts Nigel Dalton and Henry Mason.

FBI Negotiator Chris Voss and millionaire mentor motivator and success coach, Scott Harris will also be taking the stage along with an impressive list of home grown real estate success stories that you won’t want to miss.

AREC founder John McGrath tells me that this is one of the most real estate focused lineups he can remember and I’ll soon be featuring an interview with John right here on the show to dig a little deeper into what you can expect from Australaisia’s number 1 industry event.

In fact, thanks to LockedOn, if you act now, you can get a $200 ticket discount by going to ArecConference.com and use promo code LOCKED17.

My Interview with Louise

It can’t be easy climbing to the top in a city like New York. So when you come from Nashville Tennessee with zero connections, you’ve got to learn to hustle fast.

Maybe it’s her southern charm and her ability to tell it like it is, or maybe it’s her love of life, friends and family that set her apart in one of the world’s most competitive real estate markets. Either way, she’s carved out an elite career and built a very enviable personal brand.

I really enjoyed my time with Louise and it’s not hard to see how her natural skills and warm heart, win new clients every day. 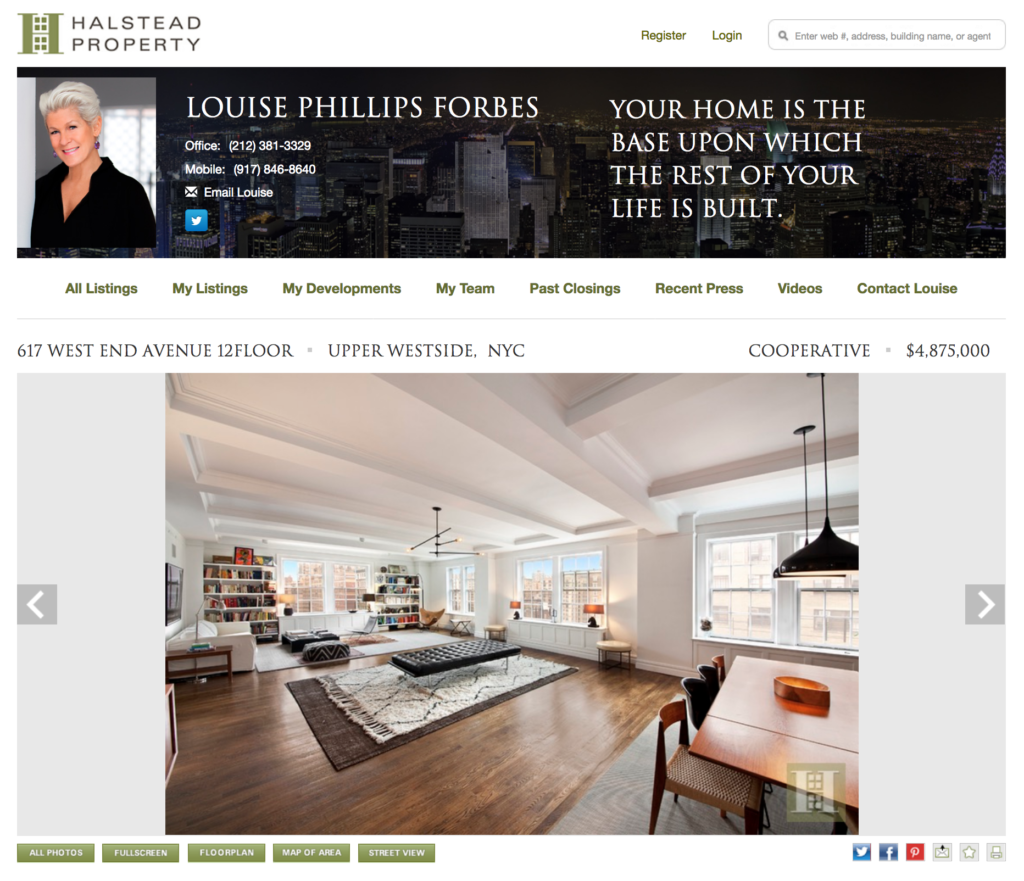 Louise has some very interesting predictions for the year ahead

1. Increased Interest Rates will be a Game Changer:
While interest rates are still some of the lowest they’ve been in years, they are increasing and will be a motivating factor for buyers early in the first quarter, especially since 95% of first-time home buyers are dependent on financing.  Expect them to act quickly and lock-in reasonable long-term loans enabling them to make long-term buys.

2. The Market is not in decline; it is re-setting:
Nationwide, home prices are forecast to slow to 3.9% growth year over year, from an estimated 4.9% in 2016. The biggest shift will occur in the ultra-luxury market, especially in urban environments with a massive construction boom, where the highly accelerated and unsustainable growth for the past 5 years lead to inflated asking prices and declining absorption rates.  As a result, New York City in particular – a national leader in the housing market – is experiencing a very efficient re-setting of the high-end luxury sector with values down 25-40% to more realistic prices, establishing a growth pattern that is more in line historically.

3. Millennials and Baby Boomers will Dominate Again:
These two dominant demographics will power demand for the next 10 years. Both generations are approaching life changes that traditionally motivate people to buy or sell a home. These life-defining changes include: marriage, having children, retiring, and becoming empty-nesters. As such, the Baby-Boomers could boost the market with double transactions as both buyers and sellers. Most of them are already home owners so they will be looking to sell and downsize to a smaller home, lowering their cost of living to maximize ease of retirement. Baby-Boomers have the potential to make up 30% of buyers in 2017, and being less dependent on financing gives them an advantage to be more successful with closings. Millennials on the other hand are more likely to finance and thereby more susceptible to increased interest rates, but they are still expected to make up 33% of buyers in the New Year.

4. The Midwest is the New Frontier:
Due to escalating rents and inflated home prices in the coastal cities, Millennials are drawn to the Midwestern markets because they have a lower cost of living coupled with tremendous job growth.  Midwestern cities claimed 42% of the Millennial purchase market share in 2016, much higher than the U.S. average of 38%. There is strong affordability in 15 of the 19 largest Midwestern markets so this trend is expected to continue even as interest rates increase. Strong local economies and population growth will fuel the appeal of these hot markets, so keep your eye on: Columbus, Omaha, Des Moines, Grand Rapids, Minneapolis and Colorado Springs.

5. Foreign Buyers Expand their Borders Beyond Coastal Cities:
While international buyers still look to New York City, Los Angeles, Miami, and San Francisco real estate as a safe haven for their money, escalating price per square foot numbers – an average of $2,400+ in Manhattan – are pushing them to look in other metropolitan areas nationwide. Cities like Nashville, Charlotte, Columbus, Chicago, Dallas, and Austin, are rapidly grabbing foreign buyers because prices are lower and they can get a better return on investment. Their primary interests are long-term growth opportunities, a luxury lifestyle, and security. Moving forward, prime coastal locations will remain strong but the trend of international buyers expanding their searches and taking a serious look at new locations will continue to accelerate.

6. Consumer Confidence will Boost Home Sales:
With the anticipation of stronger economic and wage growth in 2017, home sales could exceed 6.3 million transactions, a significant increase from 2016. The GDP growth is predicted to be 2.1% with a 2.5% increase in the consumer price index, while unemployment is expected to decline to 4.7% by the end of 2017.  Furthermore, the record-breaking rise and powerful performance of the stock market post-election has fueled confidence and given people the assurance they need to loosen their purse strings. Folks who were hesitant to spend money during a tumultuous and uncertain election year are now ready to put their money to use.

7. Lack of Inventory Spurs Fast-Moving Markets. Buyers should be Prepared:
Inventory is currently down an average of 11% in the top 100 metropolitan markets nationwide. But with interest rates on the rise, prices may go down slightly.  A slowdown in home-price appreciation could motivate more property owners to sell, easing some of the inventory crunch. Regardless, in a competitive market, buyers need to be prepared and able to act quickly when they find Home Sweet Home.  Build your team early on and don’t lose out on a property because of some unnecessary mistakes that occurred simply because you weren’t organized. Your team should include a real estate attorney, mortgage lender, real estate broker, appraiser and inspector (if necessary).

About Louise Phillips Forbes:
With career sales close to $3 billion, Louise Phillips Forbes is an industry leader in the New York City real estate market.  One of Manhattan’s elite Power Brokers, she is a multi-time winner of Halstead Property’s esteemed Broker of the Year award and currently leads the firm’s #1 team. She has achieved a significant following among home buyers and sellers, skillfully negotiating deals of all ranges. Moreover, Louise is a visionary, which is why she has been sought-out by developers throughout her career as both an advisor and an onsite director of sales and marketing. She has partnered with some of New York’s most accomplished developers on more than 30 projects to date and assembled renowned design teams to change the landscape of the city while maintaining the integrity of cherished landmark buildings. Recognized as a highly-dependable advocate for her clients, she considers herself more of an “educator” than a salesperson. Louise is frequently quoted in real estate articles for many notable publications and blogs, and is consistently named in the Real Trends/Wall Street Journal’s “Real Estate Top 250” list of best brokers and teams nationwide. She also appears on national and regional TV shows across the country to comment on local, domestic, and international real estate issues.