How can anyone survive being shot 14 times in 5 seconds?

In 1994 Derrick McManus was a member of STAR Group in the South Australian Police Force.  STAR stands for Special Tasks And Resources and is the elite strike response force and response unit in the state.

He was about to become involved in one of the longest siege situations in Australian history. More than 40 hours involving 2000 rounds of ammunition.

I live by the philosophy that it’s not so much what happens to you in life, it’s how you handle what happens and I don’t know of a better example than my guest for this episode.

I’d like to think Derek for his time and sharing his unique insights into a very traumatic period of his life.

He not only handled what happened to him, he has used his life experiences to forge some very powerful and effective tools that we can use and benefit from to help us better understand and respond to challenges and situations that will inevitably come our way.

These are life changing and life saving tools.

You’ll find Derek’s contact information and everything we discuss in the show notes for this session including his model for Durability of Human Performance which is well worth checking out.

I don’t usually prepare for an interview the way I did for this episode.

I sent Derrick some questions to ponder as a way to let him know what I was thinking and he came back to me with some very interesting answers, which you’ll also find in the show notes.

The world can be a crazy place and we can miss important signals and signs. Sometimes we know we need help. Some of us reach out and get it and some of us don’t. As you listen to Derrick’s story, you’ll discover what he did when everything closed in.

How to connect with Derrick 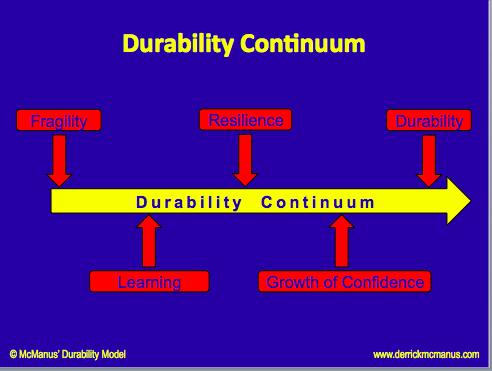