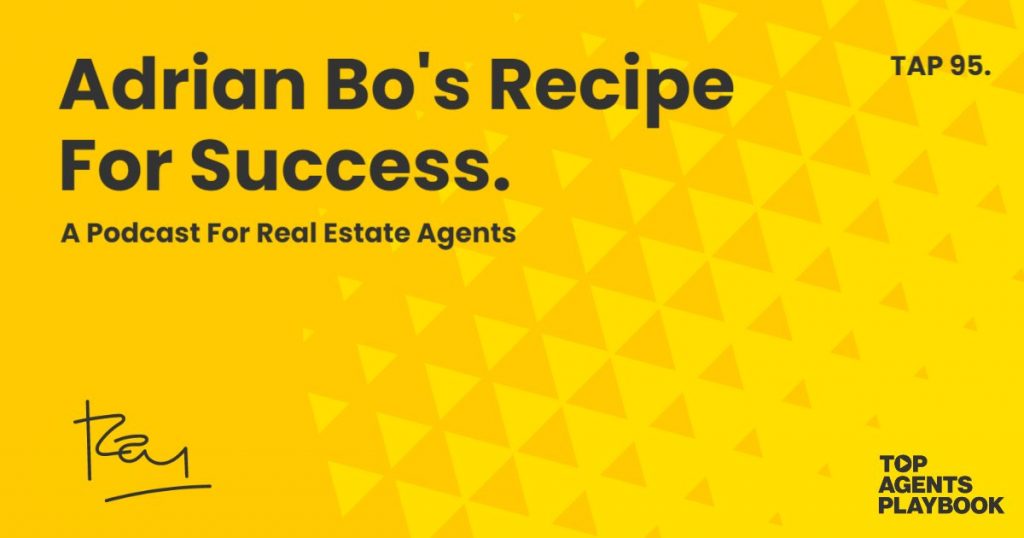 If more information was the answer, then we’d all be billionaires with perfect abs. It’s a clear message: It’s not so much what you know, but what you do consistently that really counts.

I’ve been reading a book called Anything You Want by writer and entrepreneur, Derek Sivers.

In 1998 Derek created CD Baby, an online music selling platform which he sold for $22 Million ten years later. Here’s a Derek Sivers quote I love and try to live by:  In a world of distraction, single-tasking is a super power.

And here’s another Derek Quote that relates specifically to this episode: If more information was the answer, then we’d all be billionaires with perfect abs. It’s a clear message: It’s not so much what you know, but what you do consistently, and you’ll find all the relevant links and more information in the shownotes for this episode at TopAgentsPlaybook.com/95

I don’t think anyone is immune from distractions. You can start the day with the very best intentions only to wake up 45 minutes later after disappearing down a social media wormhole or another pointless task that leads nowhere.

For so many agents, their biggest challenge is staying true to a commitment and doing what they know they need to do instead of signing up for the hope offered by yet another real estate training seminar, a Facebook advertising campaign or free webinar.

The power of focus and avoiding distractions (or single-tasking as Derek calls it) is something that’s helped many of my coaching client agents in so many ways.

I’m fortunate to work with some pretty amazing people. When we start out, I find many are painfully close to achieving the financial career and business goals they’ve been striving for, but spin their wheels month after month because they get seduced by empty promises and time sucking distractions.

I’ve actually found that this is by far the biggest barrier to success so we’ve developed a strategy to virtually eliminate distractions by setting up a simple plan and leveraging the power of accountability and I have to say, it’s pretty amazing what you can do when someone else is relying on you to do it.

When it comes to distractions, I’m the first to Admit, there’s some good real estate training content out there, but why not be distracted by the proven actions that actually produce results?

For example, how distracting is the lure and promise of creating an annual GCI of more than two million dollars? Would that get you up early, distraction free and focussed?

I’ve just listened back to my interview for this episode twice and totally re-written the introduction.

I was going to tell you how my guest doesn’t focus on commission earned or even the number of listings and sales but I think he’ll do a better job. My role is to listen and ask good questions.

In fact, the specific subject of his focus might surprise you. But it will make sense when you discover how many loyal contacts he’s attracted, and how he keeps them.

We all know time is money and when its gone, it’s gone. So what’s my point?

Why not set an exciting plan and focus on the result-producing tasks that make it happen?

The amazing thing about the digital economy is that you can outsource at least 50% of your current workload and focus on the things that make it happen. I’m helping my private coaching clients do this all the time.

But right now I’m going to hand over the coaching to one of Australasia’s top agents to not only share his strategies but the real secrets behind his success.

Adrian Bo was handpicked and personally trained by John McGrath and is now recognised as one of Australasia’s top agents and auctioneers.

With over 25 years experience, Adrian is a sought after industry trainer and speaker. He’s presented at The Australian Real Estate Conference on four occasions and shared the stage with people like Sir Richard Branson, Bob Wolfe, Tom Ferry and James Tostevin. He is a senior partner at McGrath Coogee in Sydney, which is one of the top offices in the McGrath network and oversees a team of 37

But wait, there’s more. Check this out:

Adrian would never name drop but I will. Some of his past clients include Former Miss Universe Jennifer Hawkins, Hollywood actor Richard Roxburgh & movie director Baz Luhrmann.

And make sure you listen out for Adrian’s pre-listing appoint phone script. It’s something you’ll, want to start using today!